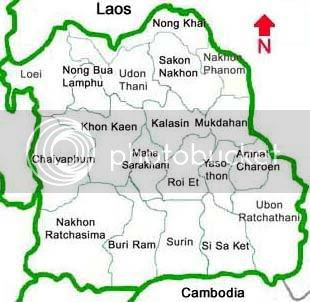 Isan (Isan/Thai: อีสาน; also written as Isaan, Isarn, Issan, or Esarn) is the northeast region of Thailand. It is located on the Khorat Plateau, borderad by the Makhong River (along the border with Laos) to the north and east, by Cambodia to the southeast and the Prachinburi mountains south of Nakhon Ratchasima. To the west it is separated from Northern and Central Thailand by the Phetchaboon mountain range.
In the beginning 20th century the region of northeast Thailand was officially named as Isan, a term adopted from Sanskrit that means “northeast.” The Lao-speaking people from this region, who comprise a majority of the population, distinguish themselves not only from the Lao of Laos but in addition also the central Thai by calling themselves as Khon Isan. The Khmer and Kuy (Suai) who live in the southern part of the northeast region of Thailand communicated in languages and follow custom that are more similar to Cambodia than to the tradition of either the Thai people or the Lao people.
Agriculture is the main economic activity, but due to the socio-economic conditions and hot, dry climate output lags behind that of other parts of the country. Isan is Thailand's poorest region.
The main language of the region is Isan, which is similar to Laotian. Considered by some to be a dialect of Laotian, but written in the Thai alphabet, Isan is among the Chiang Seng and Lao-Phutai languages, which are members of the Tai languages of the Kradai language family. Thai is also spoken, with regional accents, by almost everyone. Khmer (the language of Cambodia) is widely spoken in regions near the Cambodian border (Buriram, Surin, and Sisaket). Most of the population is of Lao origin, but the region's incorporation into the modern Thai state has been largely successful.
Prominent aspects of the culture of Isan include the indigenous form of folk music, called mor lam (Thai: หมอลำ), Muay Thai (Thai: มวยไทย) boxing, cock fighting, and celebratory processions (Thai: กระบวน). Isan food, in which sticky rice (Thai: ข้าวเหนียว, khao niao) and chillies are prominent, is sufficiently distinct from Thai cuisine that it is considered unique. Sticky rice is a staple of Thai Northeastern cuisine, and it accompanies meals frequently.
เขียนโดย smilestudio ที่ 10:22